Food for when bombs go off...

As is typical of me at a time of any sort of crisis, I revert to type and cook food until I get the all clear. Everyone probably does it, seeks solace in the familiar, a defence mechanism set up to keep the outside out and get us through dark days. On the night of the terrorist attacks a couple of weeks ago I cooked green Thai curry, whilst I cooked, the lovely, but frankly barmy, born again Christian lady upstairs played Phantom of the Opera loudly, the next door neighbours hoover-ed and argued and my girlfriend soaked in the bath with a glass of wine.

So on this bitter day I wanted some sweetness, something British, and something indulgent.

I made Eton Mess.

This rather excellent concoction of meringue, raspberries, strawberries and cream is named after one of Britain's best known public schools, that great training house for gay Soviet spies, British royalty, the sons of third world dictators the world over and where football was invented. 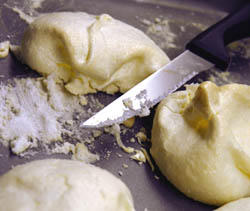 Add 250g of sugar in small bursts and keep mixing. Different books differ about which kind of sugar; some had a half and half mix of castor and icing, some just castor. I had neither in the house so used normal granulated, it worked fine. Keep mixing till you have a nice shiny, satiny finish to the mix. Then spoon it out onto the baking tray and put in into pre-heated oven. Keep it pretty low, at about 100 degrees. I left them in for about an hour and a half, they were still a little gooey in the middle, which was great as far as I was concerned.

Now, whilst they are baking, whisk up some cream till you've got it quite hard, you want it so that it can pretty much stand up on it's own. Throw in raspberries and strawberries and fold in, you want to break up some of the fruit, so that the cream gets a little rippled colour. Fold in the broken up and still warm meringues and you are done.
cooked up by Monkey Gland at 11:35:00 pm

that sounds like the perfect thing to make with meringues that stuck to the pan.
Like a mushed up pavlova.
Now I have a grand name to give dessert next time I mess up pavlova.

Ah, sounds much better than the plain old mess that I made this week, especially the gooey middles.