Eating with your hands 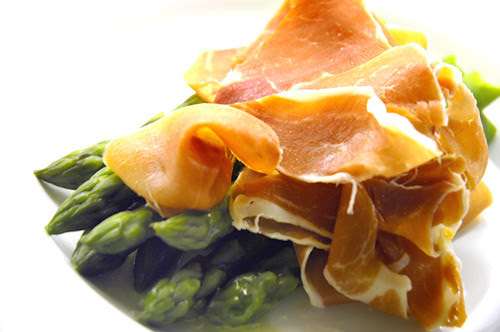 So, everyone has helped themselves to some of the asparagus and there are a couple left and I scoop one up with my fingers and dangling it high, munch it down with some relish. At which point I am subjected to some good-natured piss taking about eating with my hands and am accused of being an uncouth Spaniard with no table manners. My mate Jim comes to my rescue claiming that it is perfectly acceptable to eat asparagus in the manner in which I have just eaten mine in polite company. Here was an intriguing notion. Jim was certain and I had no idea other than at my house it was always so.

So one quick web search later and there seems to be definitive list of food that can be eaten with the hands in polite company and, frankly, I think it is entirely erroneous simply because it omits the best stuff but here it is for completeness sake:

I agree with each and every one of the foods on the list, I mean there is something deeply wrong about the eating of a burger with a knife and fork and fried chicken is all about greasy fingers. But I feel that there are some deeply obvious exclusions here and some others that need inclusion on a simply spiritual level. So here we go:

1) Pizza - I have sat with Brits and Americans and been horrified to see them cut pizza into bite size mouthfuls and fork them in their mouths. Even more horrific is the "eat the middle, leave the crust" pizza technique. As far as I am concerned pizza is self contained and perfect and eating it in any other form than as a slice is unholy. My own particular technique is to grab the end, make the crust into a kind of "U" shape and then if the pointy end is particularly sloppy, give it a flick back onto the main body of the pizza slice. I'll admit it is a slightly advanced technique and as often as not I'll resort to the common or garden "fold" style but it does lend itself to ultimate pizza slice enjoyment.

2) Pretty much anything that gets served on the bone - Lamb cutlets, roasted chicken, lamb shanks anything that arrives on you plate with a bone I reckon you are allowed to gnaw on the bones. Everyone knows that the meat is sweeter nearer the bone and as long as you do it with a modicum of good humour there is no harm in munching the nice crispy bits of your cutlet bones or really getting down with your roast bird. Frankly, things like quail and grouse really need the hands involved otherwise you miss out on most of the meat and the tiny bird died for nothing. You bastard.

3) Food that is culturally designated as being eaten with the hands - You're in an Indian restaurant and you're armed with chapattis. Screw the knife and fork. You're in Spain and you have been presented with a huge pile of prawns. Locate the finger bowl, baby, and get slurping and don't forget to slurp them heads too. You're in an Ethiopian restaurant and they have those cool rolls of bread that looks like bandages. Get on it.

4) All fruit - I don't care how messy it gets; I don't think you ever really need to eat fruit with a fork. A knife is fair play, I mean no one needs to bite into his or her pomegranate but be it a very ripe mango or orange just get stuck in with those hands. I for one have been eating mangoes incorrectly for years. A mate of mine from Nigeria corrected me just the other day. For years, I'd been slicing the meat from the pit, scoring it up and down and then left and right and then pushing the meat out to form little squares of flesh. Very pretty but ultimately very very messy. My Nigerian mate showed me that you can carefully peel the skin off one half of your mango and then holding the other end, can eat the whole fruit much in a much more refined manner. Not nearly as much fun mind you.

5) Anything you have killed yourself - I'll admit this is a pretty specific one but one I feel quite strongly about it. You killed it, you can eat it anyway you like. Shot that bird? Caught that fish? Cooked it yourself? Then there is no better way to eat it than with your hands. Something that fresh and immediate needs nothing in the way. Just you and your kill.

Ultimately, I don't see this as an issue of etiquette but an issue regarding the enjoyment of food at a fundamental level. Eating with your hands strikes me as something vital, something deeply satisfying and most of the time rather practical, I mean, how many times have you seen people struggling with something in a restaurant and seen the frustration and annoyance of their faces? Surely getting that angry at a meal is in no-ones best interest?
cooked up by Monkey Gland at 5:41:00 pm

For wimpy New York style pizza, yes, eating with your hands is fine. But for Chicago-style deep-dish and stuffed pizza (as God intended), you can't eat it with your hands. It's an inch and a half thick and full of sauce and melted cheese and sausage! I definitely agree with everything else you say. Plus olives. The "proper" way of eating olives is to put them on your fork, eat the olive, then put the pit back on your fork and lower it to the side of your plate. Ridiculous.

What a great post. I found this off of Harlan's site actually. I'll be tuning in more frequently. My bf is moving to London for the summer and I hope to be joining him at some point!! Had I been at the table we would have had a tug-of-war for that last asparagus stalk:)

I love this post! There's nothing better than eating with your hands. Especially asparagus. There's something depressing about eating asparagus spears with a knife and fork. Where's the fun in that? Just thought of one thing to add to your list of culturally designated foods: tacos and burritos.

In my own home, and when with certain friends who are simpatico, I will eat salad with my fingers. The stabbing of delicate greens with a fork seems so barbarian to me.

It's not messy, really. There are always parts of the lettuce/greens that have no dressing, and I lift them up that way.

Not that this makes anyone's official list, because I'm sure sticklers would be appalled. Their loss.

Thank you for including meat served on the bone. When I was little, I didn't know better and would hand over the chops bones to my mother. I have since learned better. You have to use your hands because there is just no way to remove all of the meat with a knife and fork.

Also, I have been known to pick up an asparagus spear occasionally.

This post is so very, very true. Especially the meat-there's nothing worse than struggling to get the last bits near the bone.

I love this post, all your sentiments hold true. It astounds me that people are so reserved when it comes to getting their knashers stuck into a good bone. Personally I am a real advocate of finger food it has a certain carnal quality about it.

great post. i cringe when i see people hack away at a delicious looking hamburger with a fork and knife. remember that seinfeld episode where georges boss started eating a chocolate bar with a knife and fork. too funny!

You forgot to mention Fish & Chips which I'm not sure if its the same everywhere but here in OZ you have to not only eat it with your hands but eat it off the paper it comes wrapped in! YUM, think I need a dose right now.

You forgot to mention sardines in Portugal. A restaurant we ate in even had a little brochure telling you the correct way to eat sardines. You remove the meat from the bone with your fingers and put into bread then into your mouth.

mmmmmmmmm, i love eating with my hands!! I shall definately feel freer to do knowing i'm not alone in this.