Not so ancient evenings... 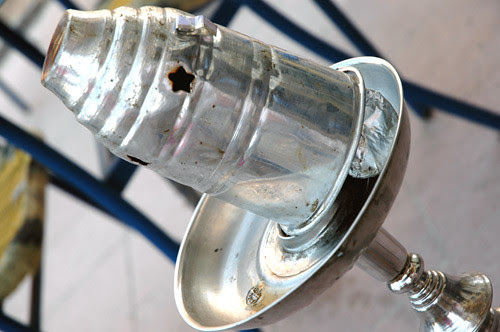 I'm sitting in the back of a slightly battered Jeep, resting my feet on a pile of empty scuba tanks with a slightly lunatic German diving instructor at the wheel. We are driving through rush hour in the Red Sea resort of Hurghada. There aren't actually that many cars on the road, but what they lack in numbers they make up for with the constant sounding of horns, dust, unannounced u-turns and a vehement hatred of traffic laws. Above the din of car horns and shouting, the local muezzin are singing the call to prayer. Dozens of voices amplified over tinny loudspeakers, the sound clashing and bouncing off hundreds of unfinished buildings in the golden light of dusk. We stop to let a couple of Russian prostitutes cross the street and are waved on by a traffic policeman in a poorly thought out white uniform.

Later, sitting in a coffee shop with one of my lovely hosts, an old friend of the girlfriend's, I ponder the immense clash of cultures that you can see on the street. Hurghada is not a pretty town, it is a massive building site dotted with souvenir shops selling "rare" papyrus and "handcrafted" water pipes. Apartment blocks and holiday homes have been mushrooming in the desert here to feed the voracious appetite that the Germans, Austrians and Russians have for the place as a holiday destination and most of the town looks hastily put together or held up by masses of wooden scaffolding. The only thing missing are workmen. There aren't any. Since the terrorist bombings in Sham el Sheik and Dahab the local authorities won't let most of them in, with the net result that only about a tenth of the buildings actually have anyone working on them. Will anything get finished on time? I ask my host, who is herself trying to get building works done. The reply is a shrug, a smile and that most common of Arabic linguistic reflexes when pressed regarding a timeframe or the certainty of a future event: "In shah'allah." God willing. 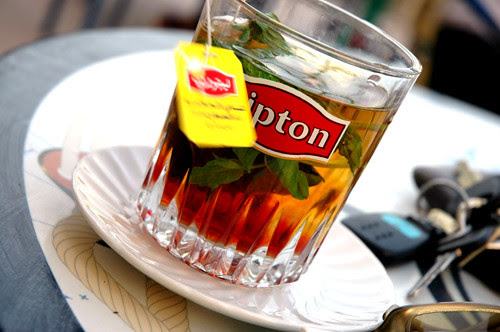 We are in a coffee shop, it is just off the main tourist drag and it is populated by local Egyptian business men, estate agents and engineers and so more accepting of women and the odd tourist. I'm ordered a shisha (better known as a hubbly bubbly to most stoner college students) and tea. I sipped on an apple tobacco and the cool smoke was a revelation, like nothing I have smoked before. Smooth and strong with apple sweetness, the perfect accompaniment to black tea and sun down. The Lipton's tea is a bit of surprise, but hey, that's progress for you.

There seem to be two main reasons to go to Hurghada. One is scuba diving. The Red Sea offers some of the best in the world. The other is to bag yourself an Egyptian boyfriend. Admittedly, the latter seems to be the largely the preserve of rather plump German divorcee hausfraus but it seems a popular pastime. Spend anytime on the beach and you'll see plenty of examples of these unlikely couples. Not being able to speak for the amorous abilities of the local available talent I stuck to the scuba diving and snorkeling. 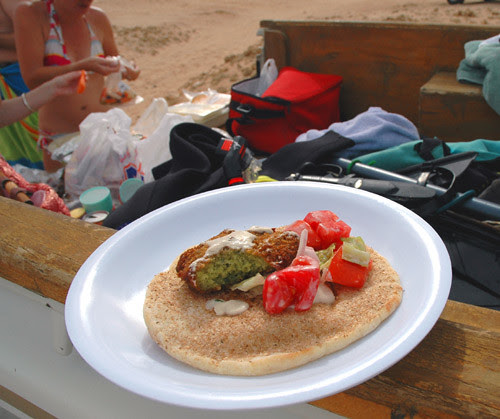 A couple of days earlier we had been taken out of town to a beach which could only be accessed by a 4x4. This wild beach which could only be reached by a stomach churning ride over desert sand, isn't much to look at, a strip of sand dotted with debris but the reef that sits about 10 meters out from the beach is an untouched marvel. Thousands of fish play over the coral in a blizzard of colours and for once we had it to ourselves. The perfect way to work up an appetite. Lunch was flat breads, some stunning parsley flecked falafel and tahina with a tomato salad and an ivory white fresh cheese.

What lunch didn't feature was the two great pillars of the Egyptian diet. Fuul and Tameeya. Fuul is comprised of slowly cooked brown broad beans. It is cooked in a distinctive narrow necked pot and once made can be served in a variety of ways. With tahina or peppers or a hard boiled egg, drenched in olive oil and lemon or with onion and garlic. I have to say it is an acquired taste, but it forms the basic diet of most people since it is so versatile and filling. Tameeya is ground broad beans formed into a patty and fried. Hot and crispy straight from the oil these were much more to my liking. Another favourites was a stunning, yet, very simple charcoal grilled quail and you'll often see pigeon on the menu, though I was told poultry and game birds in general have taken a bit of hit in popularity lately due to numerous bird flu outbreaks in the region, live chickens apparently have all but vanished from the markets . Torshi are pickled vegetables and served at most meals, these are usually lemons, cucumbers, carrots and onions and add sharpness and bite to the softer tones of Baba Ganoogh and Hummous that are also seemingly ubiquitous.

On my last day in the city, sipping sugar cane juice out a plastic bag with a straw, we drove through the predominately Arabic downtown on an errand. I watched the people who live and work here. Scores of tiny workshops, kitchens and coffee shops crammed together. Outside one house a bereaved family received mourners. Outside a workshop a blacksmith was making wrought iron furniture, whilst crowded round tables other men sipped coffee and played backgammon. Life being lived out on the streets, the private and the public boundaries blurring and filling the spaces with colour, moments of joy, tears, the sweat of hard work all wreathed in perpetual haze of tobacco smoke and diesel fumes.

We drove on and my slight reverie was broken. We stopped to pick up some ice cream and I tripped past a very nice man who had some very rare papyrus he'd like to show me or maybe a handmade shisa I could take back to London. I declined. He seemed cool with that and said he hoped Arsenal did well in the Champions League final. In shah'allah, I replied, and he grinned.
cooked up by Monkey Gland at 4:10:00 pm

Hi Monkey Gland (Arsenal devotee?), what a great account of travel in Egypt, which is often romanticised to such preposterous heights, at least by British travel writers =)

In Khartoum, I used to eat a fuul with raw tomatoes, onions, lemon juice, olive oil, cumin powder and chilli, as I remember it--do brown favas go by any other names?

Sounds like you had a great time and at least the Liptons tea was packed with loads of fresh mint. I've had a puff on some Apple tobacco in a souk in London and it's brilliant.

As Tejal says too great account of Egypt, thanks for sharing it!