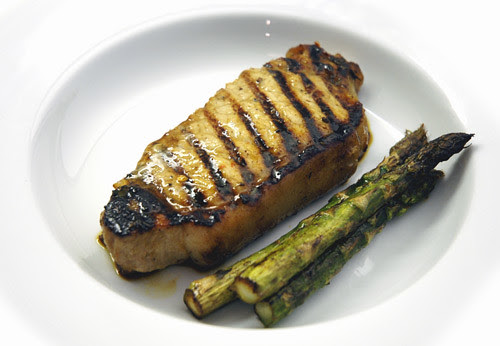 Watching football is a stressful affair at the best of times and it has to be said it's not exactly the best accompaniment to eating good food; stressful, noisy, lunching from agony to ecstasy and back again, the very creative swearing and the smell of stale beer do nothing for the appetite. However, having spent the afternoon in the company of many Trinidadians watching the England vs. Trinidad and Tobago game and having smelt the food they were preparing for the after game party (win, lose or draw, we're gonna party) I was suddenly inspired. It might not necessarily be what the Soca loving boys and girls are chowing down on this evening (and well into the morning no doubt) but just mixing my now well developed jerk mix seemed appropriate. You might remember that I waxed lyrical about George in Croydon Market and his incredible jerk chicken and pork and you also might remember he laughed in my face when I asked him for the recipe for his sauce. Since then I have been busy at work in my lab coat, making batch after batch and I am now quite proud of my jerk pork and I'll be laughing in your face if you come asking for it! All I can say is get mixing.

Of course, we Brits are famous for inventing a game that stops for two meals and lasts up to 5 days. Cricket aside; sports are at first sight not the best environment for good food. Grease and beer seem to be the only two prerequisites for any sporting event. Football is the preserve of all things portable and warming. Fish and chips, pies and burgers are easily chowed down on the way to the ground on an icy cold Saturday morning in November, paper tucked under your arm whilst you wend your way along the street with a few thousand other fans the air thick with laughter and some very serious discussion.

Wimbledon, of course, means strawberries and cream, champagne and dozing off somewhere in the second set. One of the worst ever meals I have ever subjected my friends to we were at a dog track. Going to the races can mean some pretty good food, if you can find your way through the pissed up wide boys in rented suits and braying horsey types eating picnics out of the back of Range Rovers. You Americans have got it sussed I noticed whilst I watched A-Rod score 10 RBI against the Angels last year but was more impressed by the fact that people where bringing food to my seat. I mean, I know Yankee stadium gets crowded but there is something slightly perverse about such a degree of laziness at a sporting event! Not that I was complaining mind. I have no idea what kind of food they serve at wrestling matches but I do remember a great story about how British wrestler Giant Haystacks found himself pelted with slices of ham by a rather over excited old lady who had brought her shopping into the arena with her.

The more I think about it, virtually every sporting event I can think of is somehow linked to eating or drinking. Drinking mostly it has to be said.

It was very odd watching the game at the local French caff over a bowl of cafe creme and baguette with jam and beurre. very refined. I was wearing my FCUK "show me your tackle" t-shirt complete with st goerge's flag.

I just knew you'd be watching the football. Any excuse for a drink eh.

I got here through Spitoon's blogroll and i'd just like to say how lovely your blog is. Beautifully photographed and well written!

I've never really thought about it before, but I think you're right that sports seem linked to food and drink. If you ever make it to an American Football Superbowl Sunday party you'll be blinded by the correlation!

We love some jerk chicken and a red stripe whilst watching the cricket here in Jamaica!