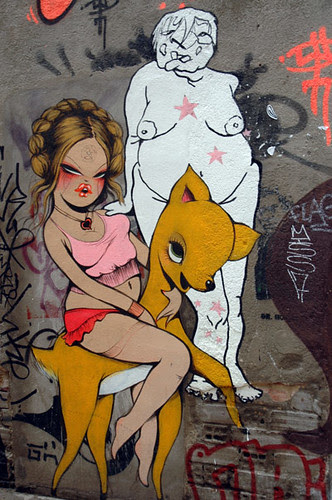 It's three in the morning on Las Ramblas and it has become a bit of an assault course. To our left a rather fearsome duo of very persistent prostitutes, to our right an equally worrying posse of drug dealers and straight ahead some very stern looking local policeman. What makes this particular adventure a little more challenging is the fact we are very very drunk and one of our number has rather ill advisedly scored off a very nice drug dealer about a hundred yards back.

It all starts rather innocently planning a stag do, everyone's very keen to see a bit of the city, eat some nice food, you know chill out and have a good time. Nothing too hectic. I'd recommended that we go to some good restaurants, hit some of the bars and generally have a very cool time. Then you find yourself contemplating a two litre glass of beer for which you have paid 15 euros and you can't really remember how you got there. In fact the reason you got there is because you are no longer yourself. You have no individual nature, you are part of a very large group of men and the path of least resistance is the only way to fly. A large group of blokes on a stag do inevitably revert to type. Beer. Strip Clubs. Drugs. Your only salvation is in forming a splinter group and heading off somewhere else.

Barcelona was playing host to the Sonar Music and Multimedia Festival and the city was full of rather jittery and twitchy bright young things enjoying sleep deprivation and sun. We had of course arrived a day late but there were enough hangers to make our first night in the city one that promised some fun and frolics. We ended up in a club populated exclusively with Barcelona's most beautiful people. So hideous to behold were we, this stag splinter group, that we had trouble getting served at the bar.

The Bikini Doble became something of a stag do staple. Two cheese and ham toasted sandwiches stuck on top of each other with more ham and cheese. I think the excrutiatingly expensive cafe's of Las Ramblas may have discovered the ultimate hang over cure. Simply put a massive hit of cheesy grease and man did it taste good with a 4 euro coffee.

Actually, despite watching England games in a bar where they served the worst tapas I have ever confronted and where the smallest beer you could buy was a litre glass, we managed to get 14 people into Los Caracoles and have some good food. Mostly based around enormous chunks of beef it has to be said, but that old hand of Barcelona guide books did us proud.

It is somehow comforting that there is something left of those years of post Franco excess in Spain. The '80's saw the urban centres in Spain descend into some rather orgiastic partying, finally let off the leash, everyone went a bit mental. Everyone came to their senses eventually but it left high water mark. It always struck me that the Spanish were predisposed to anarchy on the whole and never more so when they let loose.

But we are both on the same side really, no fight, we'll all be gunning for Enger-land come Saturday at some godawful hour of the morning.

Yeah I admit I started it!

Zidane and Viera both had blinders. Henry is a low down dirrrty cheat.

Bikini Doble's rule!(incidently "ham" - how generations of Spaniards span in their graves at that classification). Well they rule through the rose tinted spectacles of a hangover the size of Egypt anyway...

Would you recommend Los Caracoles? Its funny to see that come up after you glowing recommendation of Bikini Dobles! It must have been a very interesting trip all around!