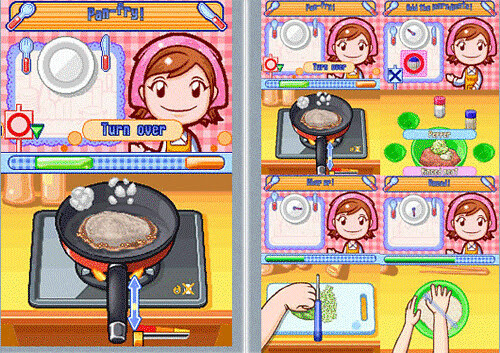 It’s not often that I recommend a game. Since when I’m not cooking or eating, I’m probably to be found playing a game, I think this a rather startling omission. Now, I know what you are thinking, this guy must be enormous in that classic geek kinda way and he’s going to babble on about some long winded Massive Multiplayer game where he’s a level 60 Night Elf who rides a flaming Pig of Doom. This is not the case, but not too far from the truth, but actually beside the point, because here is a game that combines my too great loves; cookery and my Nintendo DS. Which is surely both a stroke of genius and a happy coincidence.

Cooking Mama puts you in the kitchen, chopping, simmering and folding pastry all under the expert eye of Mama. A woman who’s eyes become flames when you get things wrong, so not too dissimilar from my own mother. Using the stylus of the DS you have to cook a variety of Japanese and Western food within a time limit trying to cook just like Mama, gaining her praise with success and her bizarre flaming eyeballs when you fail. There’s even a Nintendo Wii version which I’ll surely tell you about just as soon as Nintendo start actually making enough of the things for me to buy one. It’s addictive and frantic silliness and I’ve even found myself pondering a few of the recipes for future real life cookery. The fried gyoza look particularly tasty, if only I could get the pastry folding bit right.

I dont know about this. That knife work looks a bit dodgy.

Could this game improve the culinary skills?

Are all the things they make you cook meaty and fishy or can you play a vegetarian game?

This is the first time I've ever wanted a DS.

And this:
"some long winded Massive Multiplayer game where he’s a level 60 Night Elf who rides a flaming Pig of Doom"

..this, made me snort in a wholly unladylike fashion.

Now don't take this the wrong way, but I was reading your (thoroughly enjoyable) wedding post, and I guess you're in your 30s? Why did I have you pictured as, um, slightly older all this time?

fred and i have been playing cooking mama against each other on the Wii via our new 3 meter across projector.

Of course I wiin.

Haha, you need to get into the kitchen more!

I love cooking mama! it's what made me get a ds... playing it always makes me hungry. i'm in my final year studying japanese at uni, and the game brings back fond memories of living and eating there for a year :) i'm often inspired to make onigiri for lunch or oyako-don (chicken and egg rice bowl) for dinner thanks to cooking mama. and as for okonomiyaki... i've learned to make a half decent one out of neccesity, seeing as the only place to do them in the uk is abeno in london. right. i should be studying but i'm off to play my ds now.