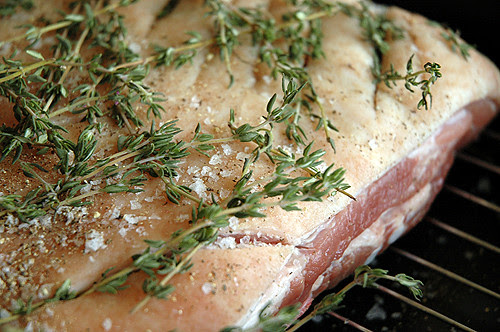 In theory, roast pork should be the prince of all roasts. Moist, veined with flavoursome fat and topped with a crown of crispy crackling. It above all meats should be the most sought after, the most revered and relished. Basically, it should be kicking beefs ass and sticking two fingers up at chicken in the Premier league of roasts. It’s unfortunate then, that in general, it can be a dry and cardboard tasting experience, a rather dull and tasteless affair.

The reasons would appear to be many. The average "porker" is raised for leanness out of some strange hangover from the eighties where we all demanded lean pork. Unfortunately, lean pork is about as interesting as paper when it comes to the roasting stakes. Rich veins of fat is what you need to fully appreciate the joys of roasting this most noble of farm yard animals. Go anywhere else in Europe and it's evident that the continental Europeans haven't forgotten this fact, nor have they forgotten the joys of all the other wobbly bits a pig has to offer, ears and feet and heads.

A roasting pork belly is a joy to behold. The golden crackling and the thyme that has been lovingly rubbed into the scored flesh, pervade the kitchen with a smell that transports, comforts and excites. This particular example came from William Rose Butchers in East Dulwich, one of the only butchers shops I know that has queues out of the door and practically round the block. Coupled with simple boiled potatoes, steamed cabbage and spinach with some tart home made apple sauce, jacked with citrus, it was everything a Sunday roast should be. The pork was sweet and rich with a hint of game, the crackling deeply savoury and satisfying. Everyone around the table was content and comforted, the ever so slightly greasy smiles telling the whole story.

This, of course, would seem somewhat hypocritical after my last post, but I was reduced to a quivering wreck by the sight of such porky splendour so I'm afraid the diet will just have to wait.