El Vergel: Back to the future 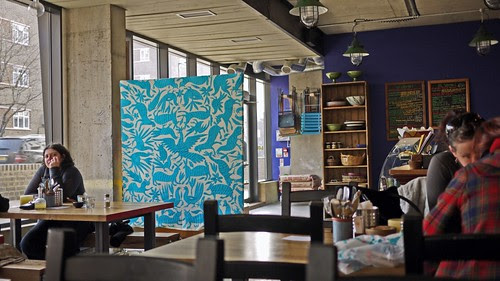 Back in the pre-history of the internet, in the futuristic year 2000, I worked in the exciting, futuristic world of web development. I was a Multimedia Developer. Exciting and futuristic, huh? I was awesome. I wore box fresh adidas and was an insufferable twat.
Given that we were awesome and hip and did a great deal of happening, our offices were in London Bridge, behind the recently opened Tate Modern. It used to be a power station you know. Awesome! Given that it was London Bridge in the year 2000 there was nothing and nowhere to eat. Borough Market was only open on Friday and Saturday and all you could get there was chorizo sandwiches. One beacon of light, aside from the truly awesome Terry’s Cafe was El Vergel. Ten years ago you simply couldn’t eat any sort of Latin American food in London and yet, here was a tiny, bustling, cantina serving churrascos, soft tacos and delicious salads to hungry multimedia developers.
Happily having recently moved back into the area with work I found El Vergel not only still open, but very much expanded. They’ve moved from the cramped, teeming site I remember on Lant Street, to a cool large open plan space on Webber Street, just off Southwark Bridge Road. I say moved, I mean, just moved, as the space feels slightly unfinished. One end of the large airy space is for takeaways and the other taken up by refectory tables. At lunchtime they were quietly buzzing with today’s equivalent of multimedia developers, with whatever job titles they have now. Webomancers or something. Twice happily, it looks like the quality of the food has survived the intervening ten years even if my hair and waist lines have not. 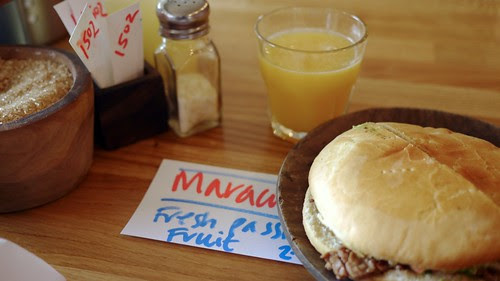 The menu looks pretty much the same, from what I can remember, a little more complete maybe. The new premises need some breaking in but it was fun to sit near the massive open kitchen and hear the Spanglish banter over the counter. The steak churrasco was a bit of a Proustian moment for me, though it wasn't quite the revelation it once had been, the bread was a little too refrigerated but nit picking aside, a satisfying blast from the past. The accompanying intensity of a glass of fresh passionfruit juice added additional strength to the weak winter sun creeping in through the windows. The tacos looked good, as did the massive salad plates arcing out of the kitchen. Luckily, it looks like El Vergel might survive my nostalgia trip and become a bit of a lunch time favourite once more.
cooked up by Monkey Gland at 7:59:00 am

You forgot the cheesecake.

I've been asked to point out that I still wear adidas and am still an insufferable twat. I thank you.