Walking into the foyer the first thing to hit you is the smell. Mugged by the combination of rosemary and floor cleaner they seem to be pumping into the place, you don't have much of chance to take in the surroundings . "It's our signature fragrance", the concierge helpfully informs me, as I splutter onto the immaculate marble floor. That the Palazzo Versace has a signature fragrance is no real surprise, that it smells like what you'd imagine the Sloth scene in Seven smells like is something of a shocker. You soon realise that the whole enterprise, like the smell, is somewhat shocking.

The foyer itself is the fever dream of a menopausal Italian suburban housewife. A vast chandelier looms like the mother ship in Close Encounters, the floor is a shining expanse dotted here and there with the sort of furniture you would expect to find in Silvio Berlusconi's sex dungeon. Walking through the hallways the walls are dripping with cheap looking reproductions of Versace fashion photos, all seemingly from the the early '90's and mostly involving super models and Jon Bon Jovi modelling soft furnishings. You soon realise they've only licensed a handful so the images are repeated again and again. As constantly assaulted as you are with the apparent trappings of luxury, you feel a bit guilty noticing the cost cutting. 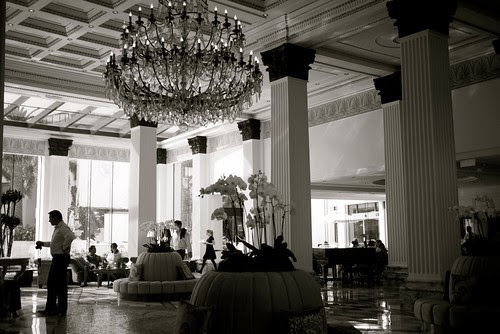 The room is certainly palatial. A sort of grown up version of one of those rooms they fill with balls for kids to vanish into. Instead of balls, it's cushions. There a mind boggling array of them covering the bed and chairs. There are twin double beds, which at first I mistake as a homage to the sort of misplaced Catholic prudishness you can find in family run hotels in Italy but then realise they've basically screwed up the reservation. This is not to say I'm not having a good time. I'm loving it, it's crass and silly and bombastic which is what you actually want from a place called the Palazzo Versace. This is not the sort of place to be subdued, quietly classy or softly and subtly luxurious. This place is on brand.

The Gold Coast is not the first place you would expect to find this hotel. The high rises of Surfers Paradise at first glance are more Malaga than Milan. Yet The Palazzo sits snuggly butted up against a shopping mall sporting luxury brands and an 80 berth marina for yachts of all sizes and is  full of Chinese tour parties either checking in or checking out the signature fragrance.

Sometime later we've sneaked our way onto the beach through the bedlam that is the Sheraton Mirage foyer across the road from the hotel. Both hotels are a little ways up the beach from Surfer's Paradise and it's surprisingly empty. In the middle distance are the gleaming, futuristic towers of Surfers. On a hazy day, like today, they seem to float above the sand like a city from a William Gibson novel, a near future metropolis of neon, designer drugs and violence. By happenstance this turns out to be an accurate description of the town, minus any glamourous aspects that being in a novel might bring. I had my wallet stolen from the car up the road from the hotel and whilst the theft of my wallet might not seem to presage a crime wave, the 57 armed robberies in the last six months probably do.

Which brings me to the buffet. I'm not a fan of the buffet. There's probably another post in that statement. This buffet was akin to something at a Russian mafia wedding. A host of mismatched cuisines and a colosal display of seafood, so big as to shame the guys from Biggest Catch. I'm sure Sea Shepard should probably be informed. It was big, it was impressive and it was a bit mushy by all accounts.
cooked up by Monkey Gland at 4:54:00 pm

That's surfers for you, ever so slightly mushy seafood buffets.

It's the marble look-alike columns that always grab my attention at the Palazzo, made from particle board and made to look like marble using effects from one of those home decorating reality TV shows.

Welcome back. Looking forward to more on Brisbane restaurants.

On a visit to Qld, I had morning tea there a couple of years ago and the words that sprang to my mind were gauche, vulgar and crass.
Can't work out why people like it!?
My 13 year old daughter loved it to bits!