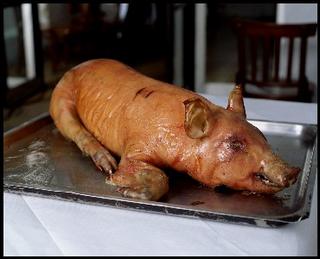 Ok, so I didn't have the suckling pig at St John's last night but as I didn't take my camera, I rooted around their website and I think this image pretty much covers the approach they have to the food itself and the presentation. Also, it looks damn good!
Firstly, I love the dining room, a oddly shaped white space with the pass of the kitchen open to view. The chefs write notes for the waiters and each other on the white tiles of the kitchen which adds a slight sense of the canteen as do the plates and cutlery, no nonsense, utilitarian stuff, white and simple. The tables are close together to give a sense of communal dining but your never feel cramped or hemmed in. Another nice touch is the waiters are all in chefs whites giving you a sense that there isn't a separation between kitchen and front of house.
I went with the signature starter, Roast Bone Marrow and Parsley Salad whilst the girlfriend went for the Brown Shrimp Salad. The marrow is a great bit of theatre, these four great chunks of bone are presented to you with toast, wet grey salt and the parsley salad and you are handed a spoon and a lobster pick to get busy with pulling the lovely, silky, wobbly marrow onto your toast. It's one of those moments of sheer moaning pleasure when you take a bite. There's a great sense of camaraderie amongst the diners too, with looks of comic horror and sheer carnivorous intent. The brown shrimp salad was simple and just delicious. The tiny whole shrimp tasting strongly of the sea.
I thought the pause between starter and main was a touch long, the couple next to us had it even worse, actually. I sensed something had gone a bit wrong with the service. But, then again it was worth the wait, so I didn't care that much. I'd gone for the Roast Lop and Turnip and the girlfriend for another starter, the Rabbit Broth. Lop is an English rare breed of pig ( you can see one here) not a kind of rabbit as I had believed before the waiter put me right (he was a funny guy). Again, the dish was presented simply, two slabs of beautiful pink pork with snow white fat and three turnips. No garnish, no fucking about. Just simple beautiful meat. The Rabbit Broth was screamingly intense, with masses of meat and veg. The girlfriend wolfed it down and kept saying "this is so good for me...".
Dessert was freshly made Madeleines, which were great, soft and light and they smelt wonderful. I wanted to take most of them home for breakfast but they proved too good to leave alone. The girlfriend had a Berry Pavlova and thought the meringue too hard but the berry slush delicious.
There is a sense of playfulness in Fergus Henderson's food, a sense of humour and an almost "go on I dare you" sensibility. However, the reputation for frightening food is unfounded. Taste and flavour are everything here and you can order even the most bizarre sounding cut of meat or piece of offal in the certain knowledge that it will taste beautiful.
cooked up by Monkey Gland at 10:25:00 am

True it's nose to tail food isn't frightening cooked and on the plate. But when I recently decided to prepare crispy pigs tails the raw product weirded me out a bit. I'm now building up the courage to do something at home with a whole pig's head. Wish it wasn't a 30,000km round trip to St John.

I think if I could eat roasted bone marrow and foie gras a few times a week I could get to the size I envision myself as. I agree with ed charles, I wish you all weren't @ 4,00 miles away. The description of the visual side of the restaurant hit the spot, I feel like I can see the tenor in which it was created.

Oh yum. I am so jealous. I have Henderson's book but amd yet to eat in the restaurant. One day...

I just found your site from a link on Chubby Hubby. Thank you for sharing the description of your meal! I too have Henderson's book and am dying to eat there. Whenever I see offal on a menu, I have to order it. Rather than finding it frightening, I find it enticing and surprising...perhaps it's a character flaw. We're lucky in San Francisco, because we have a fan (disciple?) of St John's working the stoves at Incanto, so we can always find at least a few interesting things to nibble on.

MG,
Your meal sounds incredible. I'm not a huge marrow fun, but after your description I really want to try it.

Too bad London is so far away from me. Maybe I'll have to buy their book...

Hi there,
found your site through Cubby Hubby's. I love how you descibed the bone marrow....brought back memories of my school days when mum would boil soup with bone marrow and i would ususlly be the one digging out all of the marrow and chowing it down in under a minute! Absolutely no sharing...
Your roast suckling pig picture reminded me of my dinner last week at Royal China, Singapore where just the skin was served with a small slice of pancake!

Hi MG - I'm glad you had a lovely meal there, I posted about it a few months ago too - although I enjoyed the food after all (including the bone marrow), I couldn't help feeling that it was a bit over priced (even knowing you are eating out in London) for that kind of meal. (you're lucky you can take your girlfriend there, there is no way to take Matthew, he is a super fussy eater) I love their bread though.