If you’ve read the latest Jamie Oliver cook book you might have noticed a page or two dedicated to a certain butcher. His name his Dario Cecchini and his shop is in Panzano about 40 kilometres from Siena. Panzano has all the airs of a sleepy Tuscan town, quiet, subdued, picturesque, none of which applies to Mr Cecchini himself.

Being British we turned up late. The shop had shut some half an hour before we turned up and there was no sign of Dario, only an assistant scrubbing down work surfaces telling us we would have to come back in the morning. The only problem was I had promised to feed 15 people that night and was relying on Dario to score the good stuff. Walking forlornly down the street, we noticed the man himself striding up the pavement. I introduced myself and told him we were hoping to try his famous wares. He shrugged, went into a prolonged story about the time that Prince Charles had come to the shop, uttered a few slurs about his royal highness that I am sure would be treasonous back home and invited us back into the shop. 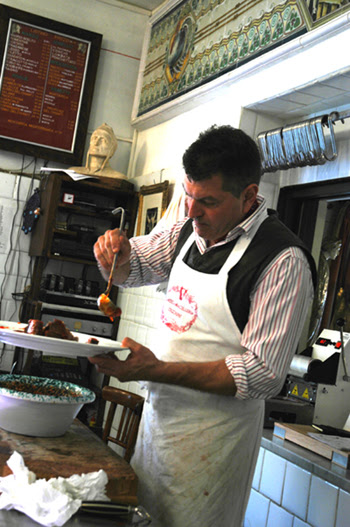 Dario is famous for his hospitality. I tell you, it is a reputation that is entirely justified. He poured us wine, cut great chunks of a fennel infused salami, great chunks of bread, massive chunks of cosimo, the Tuscan answer to meatloaf slathered in a sweet chilli sauce, turned on the heinously expensive valve powered stereo behind the counter and blasted us with a fine selection of ‘50’s rock ‘n roll. He reached up into his massive book case and pulled down two books for our perusal. The inevitable Jamie Oliver, and a book of old Charlie’s visit to Italy where Dario was featured. No wallflower this bloke. Whilst we gorged he carried on about his business, shouting at staff, at passers by and at regulars.

There is nothing small about Dario. His hands enveloped mine as we shook hands and they were like warm slabs of beef. His huge smile, his rather natty pink trousers and his generosity were all loud, but pleasingly genuine, and the man knows a thing or two about meat. The cosimo was like no meatloaf you might have eaten, strongly meaty, tender and warmly spiced which against the sweet chilli was a joy. The huge slabs of salami where perfectly textured, the bold flavours singing out. No namby-pamby slices for Dario, these were a good half a centimetre thick.

Despite all of this, he was still closed. So availing myself of the print outs of recipes and words of wisdom that are free for the taking from the counter we said our goodbyes. Dario’s wife had pointed us in the direction of a cheese maker and we set off, hoping to at least score some decent pecorino. 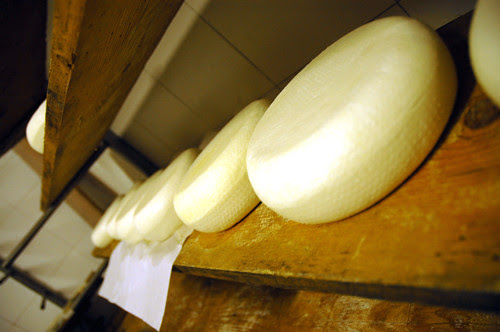 I don’t know if you have seen that film “Wolf Creek” where three young people break down in the outback and are taken by crazed killer to his camp and then chopped up in various inventive ways. Well, the cheesemaker’s house was a replica of that camp. Crazy looking dogs on chains, scary broken down and stripped farm machinery. We had to follow him in our car up to where he cured the cheese, with most of my travelling companions getting the cinematically induced heebeegeebees. We needn’t have worried. Curing in long satisfying lines were pecorino cheeses of every age. From the ivory white fresh cheeses to parchment like older varieties. And a ricotta that made me want to hug the fat, rather dishevelled cheesemaker. I took a fresh and an aged pecorino and hated myself for not buying a 2kg tub of ricotta. I could have have got through it, I know I could.
cooked up by Monkey Gland at 10:05:00 pm

i wish i hadn't read this. i had an alitalia voucher which expired today, and in my fit of indecision i didn't book anything. i weep.

next time you go to tuscany, since you are now a convert, you must go to my favourite restaurant so far, "La Giostra." i can't imagine that a marriage proposal--or any other proposal for that matter--would ever be turned down there. the food is that good.

Wow, what a fantastic trip.

No mention of cock-er-ney lasagne... and you promised!

Hope you had some pan forte while in Siena (it's almost impossible not to!)

Otherwise, seems like you had no trouble eating well...

A weekend in Tuscany sure beats a hangi in Rotorua.

This is an amazing story, absolutely.

I can only imagine what this must have been like - you are a very lucky person, and captured your trip perfectly into words.

Too bad you only got to taste!
But at least you got that.
Beautiful description though, I feel as if I was there...

Which is why if it was like Wolf Creek, Im glad I wasnt! LOL.

This is a really nice blog setup.I sure hope mine will be nearly as good. Comic Book