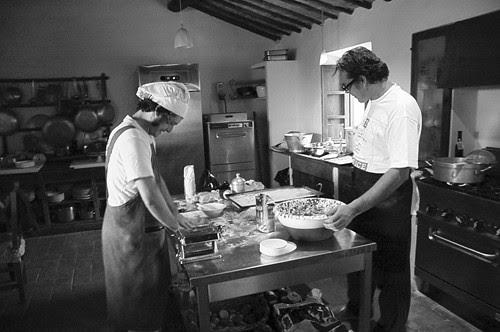 These two fine gentlemen, Paolo and Francesco, are my new food heros. These guys, gruff, tattooed and womanisers that they are, cook like angels and I have learnt more watching them over the last week than from any cookbook I have read about Italian food over the years. You see them here making ravioli and cantucchi ready for the wedding of two of my friends. These guys produced the silkiest pasta, soft, yielding and yet with bite, filled with ricotta and spinach, they were so good that I could have wept. These two are crying out for their own TV show, a kind of Italian Antony Bourdain and Gordon Ramsey, with more charm and funnier jokes. Also, you have to love that kitchen.

I spent the week in a villa near Siena and to tell you the truth, I have never previously been a fan of Tuscany. The Chianti-shire label seemed so apt that I had taken against the place before ever really spending any time there. I would wax lyrical about Calabria, Sicily and Umbria as being far superior and interesting than the Italian theme park that I imagined Tuscany to be, full of gushing Brits banging on about the tomatoes. As, ever, my prejudice was proven wrong, as all prejudices should in the long run (I just have to work on that coriander one a bit longer).

Being early September the country side was a hundred deep earthy tones. The sunflowers were dry and wilting in the fields, the trees heavy with walnuts and figs and the vines laden with deep red fruit. Early on, taking the train out of Pisa, I conceded that it was quite pretty. Stopping in Empoli to change trains for Siena, we stopped in a bar and had lunch. It was a typical Italian set up, you had to get your own tray, bread, cutlery and water from the shelves. Once you had all the requisite self service items to hand, the waiter would come over and take your order. You had to have all the items though, or he wasn't having any of it. One stunningly good rigatoni with ragu later I was conceding that we might eat well. It's always a good sign when the waiter gives you a bollocking for not dressing your salad properly. After paying the 8 euro bill, I was conceding that we might eat very well. When we got to the villa about 12 kilometers outside Siena and saw the wood fired oven I was sold. 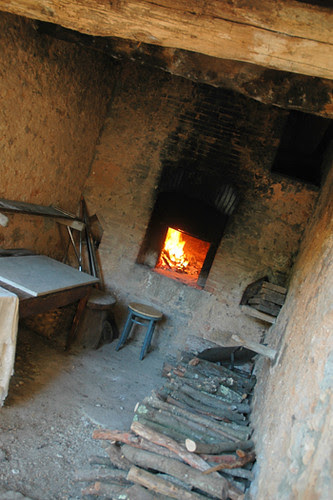 Paolo fired this bad boy up on one of the first nights to make pizza. The heat from the thing was incredible, a raw uncontrolled heat. He explained that he would know when the temperature was right as the blackened bricks at the back of the oven would turn white.I watched, rapt as a school boy as he made the pizza dough. Oil, mineral water, 0 grade flour and yeast from the bakers and hard work. He'd fired the oven a couple of days before hand so it only took a few hours to get up to temperature. If it had been cold, it might well have taken all day. The pizzas that emerged were the best I have eaten. Full stop. I really fell in love at the moment. Crisp base, thin and bubbled and ever so slightly scorched with a sharpness that complimented the toppings, rather than vanished in a chewy, flavorless lump in your mouth. I include every other pizza I have ever eaten in the "chewy, flavorless lump in your mouth" category from this day forward. Topped simply with tomato and mozzarella, some with proscuitto, mushrooms and gorgonzola, others in bianci with porcini mushrooms and the dessert, more pizza coated with Nutella and toasted almonds. Paolo and Francesco weren't finished either. Nope. They had a few other tricks up their slightly singed sleeves. 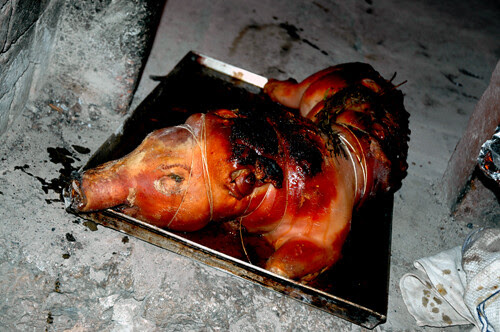 Oh, glory be. What a sight. What a smell. This absolute beauty formed the main course at the wedding feast and I was hard pressed to keep up with the toasts to the bride and groom because I had to keep coming back to the oven and checking the progress of our beautiful beast. The love and expertise with which this beast was cooked was breathtaking. Served with a little fennel and a few roasted potatoes, it was perfect. The meat was sweet and tender, the fat richly savory and wobblingly translucent. Perfect, you'll just have to believe me on that score. The single finest piece of pig I have eaten in, well, forever.
You can tell I was getting over excited by the whole thing. It's not like me to be quite so gushing. However, I was having a hard time finding anything to fault about my Tuscan visit. Not being one who is used to doing things by halves, I kept my eyes and ears open, waiting, watching...
cooked up by Monkey Gland at 10:06:00 pm

OH! My heart be still!

Monkey Gland sounds very, very happy!
How grand that you had such a great trip, and how sad that now you'll be ruined on every other pizza. :(