In search of the new 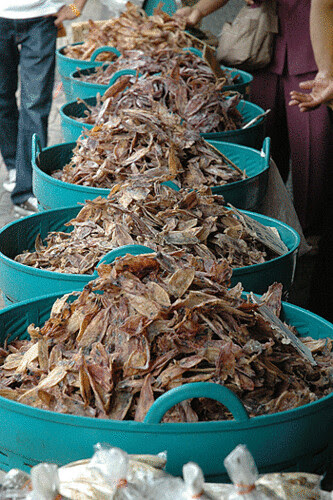 I was asked today if there was anything that I hadn’t eaten that I really wanted to. Some strange culinary treat that I had never tried or never come across. It stumped me slightly, I mean I’ve eaten some pretty weird shit in my time and never being one to deny myself much in the way of food, there isn’t much I haven’t come across. I’ve eaten caviar off the chest of a willing, if inebriated young lady. I’ve sampled the delights of brains and various offaly goodness from a host of animals. I’ve eaten gold leaf laced milk pudding and goose barnacles fresh off the rocks. I’ve been pretty adventurous but then again, there’s always something you haven’t tried yet.

Some are geographical considerations. I’ve never eaten real gumbo in Louisiana or the sort of BBQ that Dr Biggles seems to encounter on a near daily basis in the US. I’ve never been to the Tsukiji Fish Market and eaten tuna marrow scooped from the spine of one the great shining beasts. Still in Japan I’ve never drunk tea prepared in the formal way or a bowl of ramen from a streetside vendor whilst the neon twinkles, like Deckard in Blade Runner (Yeah, I know it was LA, I’ll out-geek you in a second sunshine!). I’ve never eaten a steak in Argentina or ducks feet in China. Never sampled a bolognaise in Bologna or a Bouillabaise in Marseille. Then, this struck me as cheating. I mean it’s just a simple matter of not having been somewhere and naming things that places are famous for, which means I could go on for ever.

In the same sort of category there are all those restaurants I’ve never eaten in. I’ve not made it to the Fat Duck and tried the sea food platter with ipod playing the sound of waves (a new addition to the menu if the slightly hysterical tabloid press is to be believed). I did once go to the Manoir de Quatre Saisons but got turned away. Admittedly, I was very drunk in the passenger seat of a vintage Bentley and demanding breakfast at 5.30am, but again that’s a whole other story.

So , I tried to break it down a little. Firstly, edible animals that I had never eaten that theoretically I could get in this country and that I would actually want to eat. Squirrel perhaps, or some sort of snake? Locusts? Hmm, maybe. I seem to remember eating earth worms when I was small, so they are out. A stag? Yeah, that seems more like it, a great big slab of stag. Or is that just venison? A roast vole? A roast mole? Altogether too Wind in The Willows, methinks and probably endangered. A hedgehog? Now, there’s something quite evocative, baked in clay round a gypsy campfire. Probably not something that happens a great deal these days and St Tiggywinkles would probably have something to say about it. I changed tack.

On the vegetable and plant front there are probably a million odd things that grow in hedgerows and fields that I have never heard off that would be good to eat. I imagine peppery leaves, succulent weird shaped tubers and strange, twisted fungi. This is where I need to do some serious looking in the culinary states as I imagine I’m missing out on some pretty cool stuff, not that I’ll find it in the supermarket. Time to buy some tweeds, a pair of sturdy Wellington, a book on botany and get muddy.

I am so with you.
I'll bring the shears and plastic bags.

Fun article! I recently cooked a pigs head which seemed a fairly non-unusual item (seeing as it's attached to what is most peoples favourite meat), but from the response I got, it was still quite shocking. Did you read Hungry in Hogtowns article about deep fried rabbits ears? That was quite intense too.
Ever read Blade Runner - A Movie by W.S. Burroughs? Much deeper and thought-provoking than the actual film.

Did you know that locusts are on the menu right here in lovely London? Archipelago is a weird but wonderful restaurant near Goodge Street Tube station which serves up tasty food. The menus are rolled scrolls stored in old treasure chests and feature unusual dishes like crocodile fillet seared in vine leaves, sliced wildebeest with soba noodles and wok-seared frog's legs (although how they can claim the latter are vegetarian makes me a little suspicious...). Chilli and garlic locusts and crickets and chocolate covered scorpians are optional sides which I haven't tried myself but could probably be persuaded to try.