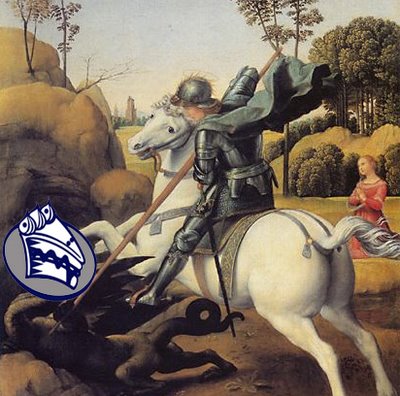 St Georges Day is upon us and that can only mean one thing. Well, actually in this particular case it means one thing. That thing is pudding. Yes, What's for Pud is here and your sweet and sticky entries have started to arrive thick and fast with some quite spectacular efforts. Keep them coming and I'll start writing the round up once the inbox has reached critical mass. If you're unaware of this great celebration of the English sweet tooth then take a look here and get your pinny on.
Growing up in England in '70's was probably a bad time to be growing up generally. In the fall out from the summer of love and in those dark pre-punk days of prog-rock dinosaurs battling for supremacy of the 15 minute drum solo, England was a dark and brooding presence, a powder keg of revolution waiting to go off. This all, of course, was of no consequence to the young Monkey Gland who was only really concerned with Lego, T.V and food. Of course, I liked desserts, but we rarely got those most triumphant of British puddings at home, occasionally my dad would make a vast trifle, but that was usually a sign that we were about to be invaded by an equally vast number of aunts, uncles and cousins for Sunday lunch. In effect, there were only two places that I could score the quality pudding.
If everything that has been said about just how bad British food got in the '70's was true, can you imagine just how bad school dinners were allowed to get? You'd be wrong. In a world before Jamie Oliver campaigning to get pasta al forno served to our young, there were fearsome dinner ladies in schools doling out vast shepherd's Pies, strange mystery meat casseroles and chips, huge never ending supplies of chips. Yet, best of all were puddings. Chocolate Sponge in Chocolate Custard, Orange Jelly Cake, Steamed Treacle Pudding and Custard, Tapioca Pudding, Rice Pudding and Jam. To be honest, I'd more than likely fall into sugar induced coma if I tried to eat any of it these days, but then it was purest manna from heaven. Thick, warm, cloying sweetness. There was no room for any kind of sophistication in your school dinner pudding. You had to eat it as quickly as possible in order to vie for position if seconds were on offer, in which case there was some serious queue barging to get done.
The second pudding rich zone was friend's houses. There were a few friends growing up, whose mothers were those genius home cooks, real old school cooks. Women who had been handed a treasure trove of good honest culinary tricks by their own mothers and were keeping the faith, whilst everywhere around them convenience food was infiltrating and seducing. This was magical stuff to me, who's own mother's repertoire was strictly Mediterranean apart from the odd Cottage Pie. These women were few and far between but by a pretty early age I had figured out whos mums knew the score and would get myself invited round for tea as often as humanly possible. There was always be a dessert, a pudding of mind bending sweetness. A bread and butter pudding heaving with currants or steamed pudding drowned in the brightest yellow custard imaginable. Rich and heady scents of cinnamon and nutmeg wafting through the dining rooms of south London housing estates containing one small boy in a reverie of pudding.
cooked up by Monkey Gland at 12:11:00 pm

My favorite and sweetest dessert as a child was my Grandma's Butterscotch Pie. It was so sweet it would make your teeth ache and so richly filled with Grandma's home-made love. I miss her.

In the 70's I went to England during the holidays to brush up my English. This were the longest three weeks in a guest family, because the food was so horrable for me. But 30 years later I am a great fan of the English and British Chef's.

I remember the most awful school lunches which everyone was required to finish at the girls prep school I attended. There was a lot of negotiating and dog-meat sausages and black-ball mash were thrown under the piano or smuggled out by any means necessary. The best they served -snowballs for dessert! No wonder we used our pocket money to buy avocado pears! Good for Jamie Oliver, I say!

I was frequently sent to the head mistress for refusing to eat tinned ravioli--thank St George (seems only right) for pudding or I would have starved!

Your school puds must have been a whole lot better than mine because I only remember school food as absolutely vile and the worst thing was that I was subjected to it for breakfast, lunch and dinner. I went to boarding school.